Travelers in Iceland are met with unusual variability in landscape and land condition. Within only a short distance they will experience anything from lush vegetation, fertile agricultural areas, sparse vegetation and desert.

The visitor will soon discover that the lack of trees and the extensive barren areas are some of the most striking features of Iceland. Possibly seeming quite natural in a country of volcanic origin with a chilling name. But, the reality is very different. 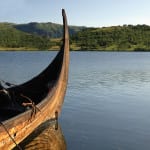 Most of the deserts and areas with broken soil cover were once covered with lush vegetation. The history of the soil- and vegetation resources of Iceland is a tragic example of long term consequences of the human battle for survial in a sensitive environment.

At the same time, with the oldest soil conservation services in the world, Iceland is also an encouraging example of what can be done to halt the destructive forces. 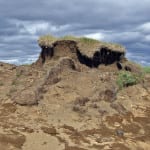 The first settlers who ventured to Iceland over 1100 years ago (874) came to a fertile land. Vegetation may have covered 60% of the country, and woodlands, mainly Birch (Betula pubescens), covered at least 25% of the land area. The trees sheltered loose soils of volcanic origin. But the woods were cut, burned and grazed and soon declined rapidly. ENSK_sagnagardur 018The initial loss of tree cover marked the beginning of catastrophic soil erosion processes that have devastated the Icelandic ecosystems. 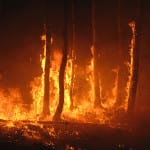 The climatic deterioration in the 16. – 19. centuries and volcanic eruptions speed up the processes. Wind and water removes the soil leaving nothing but rocks and gravel. About 60% of the original vegetation may have been lost. The remaining vegetation is extensively degenerated.

About 96% of the tree cover has been lost, and trees now cover only 1% of Iceland. Poor land condition and continued soil erosion are considered to be the most severe environmental problems in Iceland. More than 37,000 km2 of the country (103,000 km2) are barren deserts and in addition large damaged areas have limited  ENSK_sagnagardur 015productivity. 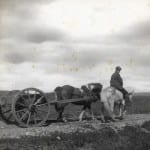 The rate of soil erosion was highest around the turn of the last century, threatening many districts of Iceland. However, it was not until the Soil Conservation Service of Iceland (SCSI) was established in 1907 that an organized battle began against the destructive forces.

The first 50 years were mostly devoted to fighting catastrophic soil erosion and fast moving sand dunes. Fences were erected to protect areas from grazing, and Beach Wildrye (Leymus arenarius) was seeded extensively as it is the only plant capable of immobilizing drifting sand in Iceland. Stone or timber walls were also  ENSK_sagnagardur 028erected for the same purpose. Today, inhabited areas are no longer directly threatened by soil erosion. Therefore, in recent decades, the emphasis has shifted towards restoration of damaged ecosystems and soil resources. Much has been achieved and in many areas vegetation cover has been established. Despite the 100 years of active soil conservation and restoration, soil erosion is still widespread and land condition is far from adequate. 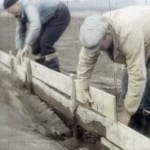 The role of the SCSI has increasingly been aimed at providing guidance and leadership to all who can provide landcare. About 20% of the nation’s sheep farmers, and a number of other land users are participating in the soil conservation work ENSK_sagnagardur 050under the theme, “Farmers Heal the Land”. Numerous organizations and volunteers also participate with the SCSI in co-operative tasks.

Strategies for sustainable land use are being developed, following the path marked by other nations. The SCSI aims for increased land-user responsibilities and an ethic of land stewardship 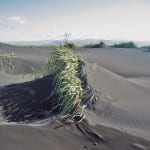 Soil conservation and restoration activities have an important role in meeting the goals of the Climate Convention. Carbon dioxide (CO2), one of the main atmospheric greenhouse gases, is converted to organic matter by plants, which in turn is the foundation of land fertility and food production. Thus, CO2, being an environmental threat in the atmosphere, once converted to organic material it is a valuable resource. CO2 can in fact be regarded as a misplaced resource!

As a result of the massive land degradation, vast amounts of carbon have been lost from Icelandic ecosystems. It is estimated that an equivalent of up to 1.8 billion tons (1.8 x 106) CO2 has been lost from soil and vegetation since settlement. For comparison, annual CO2 emissions from human activities in Iceland are about 3 million tons CO2. The Kyoto protocol to the Climate Convention includes options that allow nations to use conversion of CO2 to organic matter as one of the tools in  ENSK_sagnagardur 104meeting national emissions targets. 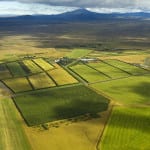 The headquarters of the SCSI are located at Gunnarsholt, 100 km east of Reykjavík, close to the town of Hella. The visitor will find it hard to believe that this green spot was a drifting sand dune and an abandoned farm in 1927.